Will RS ever be Scaled Up?

As we all know, the ruescape is a popular game all over the world, it has lots of players come from different countries, players can get high level through Runescape Gold, items and experience.but now the question is do you think crowded in game ? After all there are many players in runescape, they need to farm Runescape Gold and do daily tasks.

RuneScape is so tiny D: It's like, what, a few square miles total? Everything is so dang small, Falador is probably the same size as an average school! The entire city of Varrock, one of the biggest in RuneScape, is the size of a Clan Citadel (which is probably the only thing that's reasonably sized). Look at the mountains, they are basically just hills. I could easily walk in a straight line from Taverly to Cathebry in real life. The rivers are more like creeks, the "forests" are the size of a modern city park, there are a lot of cities sitting right next to each other, which wouldn't make sense for them to be different cities when they are so close. There's also like 4 farms in RuneScape, and worst of all you can't walk 3 minutes without running into a lodestone (which helps hide the small size of RuneScape).

I remember reading that the html5 client makes you realize just how small the world actually is. They were discussing that they'd like to scale the world up, but it would be put off until higher priority updates are done. It might've been on one of the Q&A's they posted on YouTube. Someone correct me if I'm wrong. 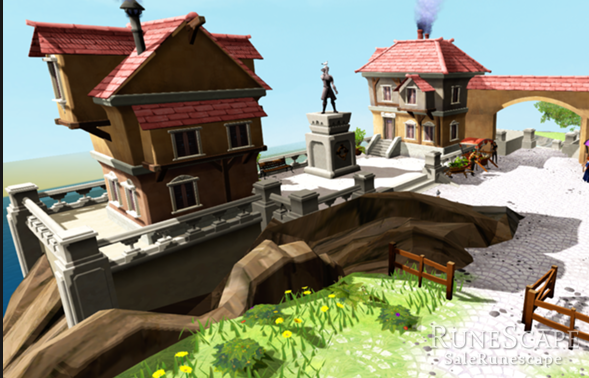 We're considering it but it requires a massive update to move everything around and keep all of the content working, and I'm not sure it's worth the effort (we could be using that time to do cool new content!

While everything looks absolutely marvelous in the BETA and the draw distance is fantastic, it really makes you realize just how tiny and cramped the RuneScape world really is. The fact you can see so many cities and major areas all clumped together ruins the draw distance a tiny bit.

Even though it would probably take some big development power, I would love for them to start working on simply "expanding" the map. Not necessarily adding huge new areas, but increasing the amount of landscape, mountains, rivers, trees, open fields etc. between cities and popular areas.This would allow players to have a very long, beautiful snapshot into the distant wilderness and landscapes, but you would not immediately see the next city right away until you walked half way there.I don't see any problem with the increased walk times, as we can now teleport to literally almost every area of the map in mere seconds!

So what do you think about the scaled up the runescape? Do you want to change it now? You can tell me if you have some ideas for runescape.